Why people get offended by jokes 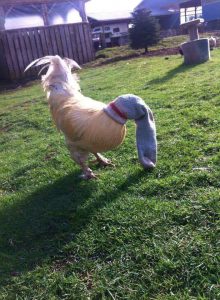 Some people get offended by jokes because they find the violation or target contained in the joke to be unfair or illigitmate. What people consider unfair or illigitimate varies. There are as many laughs and scowls as there are people.

Consider the image above. It's a chicken, possibly a rooster, with a sock over its head. Your interpretation of the joke depends on who you are. It depends on what you know. There may be thousands of interpretations of the joke. Some people have found that image offensive. The roarboar knows because it has been rated offensive by some people.

We know that some people love animals. They see an animal that has been put in distress because it has a sock over its head. There is a perspective that a chicken is not a legitimate target, and that is unfair to the chicken. And at the roarboar, we empathize with that perspective. Poor chicken.

We know that some people love absurdist humor. If a chicken were to wear a sock, it would be on its feet. The chicken is wearing the sock as though it's a hat. That's not how you wear a sock, silly. And for some people, with the perspective that chickens are pretty silly animals, a chicken is a legitimate target.

We have know that people who enjoy sex-oriented humor and puns either LOL or HA at this image. It's a very subtle joke. It's a sock...over the head of a rooster. Another name for a rooster is a cock. So it's a cock sock.

So, there you have three intepretations of why a seemingly simple joke, an image of chicken or a rooster wearing a sock over its head might be fair game to some, and offensive to others.

Where this causes severe social problems is when families and communities don't agree on what is legitimate and what isn't. For those who lean towards authoritarianism, they find jokes about leaders to be deeply offensive. In part, there is deep truth in comedy, and laughter is often an involuntary reaction. They don't like that kind of power. So they seek to limit it.

Sometimes those who are on the progressive side of their countries don't believe that certain groups should be targets. That it is fundamentally unfair to exclude or bully disadvantaged groups. They find that kind of humour deeply offensive.

Jokes and laughter are very important aspects of our culture and the stories we share with each other. Disagreements about which targets are legitimate and which ones are not, and the associated use of shame to address the situation, causes all sorts of issues. It certainly causes people to share less with each other.

There is a way through all of this of course. We should be able to still be surprised by each others' creativity in our humour. There's something deeply beautiful and honest about a roaring laugh.

Come laugh with us.


Or read some funny news